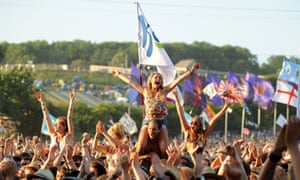 For the British teenage music‑lover, a summer festival is a rite of passage. I remember my first as if it were yesterday. I prepared weeks in advance, gathering intel from the wristband-flaunting older kids, and trawling internet noticeboards. I followed closely the advice to pack clothes you didn’t mind getting ruined, and plenty of socks (for trench foot). I even surveyed the Cool Parent contingent – the ones who take their children to Glastonbury and say things like: “I won’t say, ‘Don’t take drugs’, but I will say, ‘Stay hydrated’,” while winking.

And my first festival delivered everything I imagined: music, adventure and friendship, with a background note of possible death. It would be the first of many, and the beginning of a lifelong love.

But some years later, I detected a shift. Ticket prices shot up, headline acts smacked of nostalgia, and new music was forced on to smaller stages. People arrived in glamorous clothes, carrying coolbags filled with fancy wines. “Stupid 30-year-olds,” I’d rage. “Transforming the festival, while pricing us out.” I felt I was suddenly too young for these new festivals.

And although my feelings changed (not least because I became that 30-year-old), I am reminded of this now, because the season is in full swing yet our usual gaggle is smaller than ever. “I’m too old,” came the RSVPs from friends.

I’m told that at around my age, the feelings of being “too young for this” and “too old for that” overlap, before giving way to the latter. But where do we learn to shut ourselves out of experiences we love?

I’m planning to unlearn it. If my friends aren’t up for it, perhaps I can dig out the email address of a Cool Parent from years ago.